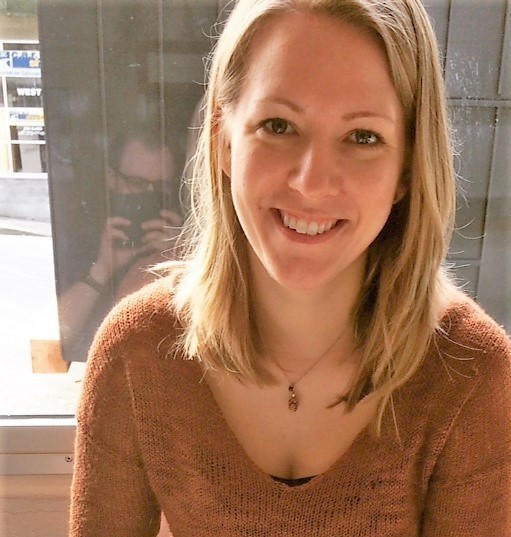 The first thing that goes through my head as I pull up to the Royal Columbian hospital and spend the next fifteen minutes trying to find an empty space?

I finally sneak my little Volkswagen into a spot others were afraid to use and make my way into the main entrance of the hospital where Melissa Binnema is waiting for me.

She leads me through the maze of the hospital as we head to the cafeteria to sit down and chat about her work and how she sees it as part of God’s call on her life.

“I don’t view my work very sentimentally. I don’t think of it as this massive opportunity to care for people and just love people. There is so much more that I have to do in a day that that becomes only a part of what I do. And because I never thought I would go into nursing it didn’t feel like “Bing! This is my calling! I’ve always known I wanted to be a nurse.” But everything just fell into place at the right time in my life, and so that probably feels as close as anything to a calling. And it uses a lot of the skills or attributes that I have, and it fits what I would have wanted in a job where it is physically, socially, emotionally, mentally demanding. Like it just incorporates so many different aspects that it feels like the right place for me.”

Melissa recognises that not everyone experiences this flash of inspiration and direction that is romanticised as a calling. She doesn’t think there has to be some point in our lives when God makes it extremely clear to us that he wants us to do a specific thing. Sometimes this does happen, but more often God seems to unfold his plan for us as we go along.

Melissa sees calling as more about using the gifts and talents that we have, to the best of our abilities, in a place that fits. And sometimes that shifts.

“There are probably other jobs that would fit me as well. … I think a lot of what I enjoy in my work is the social interaction. That you can get in a lot of different careers, for sure. Even in nursing, there are so many different ways to be a nurse, or areas you can nurse in. So, it doesn’t have to be exactly where I am. It can shift and evolve over time.”

As with many of the others I have talked to about their careers, Melissa never intended to be a nurse.

“When I was in high school, I was interested in English and I thought, “Oh, maybe I’ll be a journalist or something like that.” But I didn’t really know, so I went to King’s University and I did English, Psychology, General Studies for the first year. And then I realised, “Well, the things that I am interested in I’d probably need a Master’s or PhD for and I’m not sure I’m passionate about it enough to go that far. And I realised that a desk job probably wasn’t going to fit for me; I like fast-paced work. So, I dropped out of King’s, just didn’t return after the summer, and did a six month Care-Aid program kind of on a whim. My Mom was like, “Oh, you like old people, maybe you should give it a try.”

While she did enjoy the Care-Aid work, she realised that she had other talents and skills which she wanted to develop.

“I kept wanting to get my hands into things that were out of scope. Sometimes I would get to help with dressing changes, or positioning patients in a certain way and I realised, “I want to do that.”

This led her to Douglas College, where she completed a Bachelor of Science in Nursing and became a Registered Nurse. Currently she works at the Royal Columbian in a post-operative ward that deals with abdominal surgeries.

“That brings in a whole slough of different people; different ages, and different backgrounds. And we do fairly routine surgeries, but also fairly complicated surgeries because this is a level one trauma centre we get a lot of the traumas from the area too; like a lot of the gunshots or stabbings or things like that as that generally tends to hit the abdomen somewhere. So that can be just a little bit different.”

This mix of different ages, backgrounds, and circumstances leads to some unique challenges within her work. There are times when prejudice, or negative judgements impact the care given to patients.

“Our health care system can be quite good because it is supposed to provide equal, fair, free health care for all. But there are areas in the hospital where prejudice or judgements get made about people because of their history or background, or anything like that. …“Because it’s a trauma centre we get people from various backgrounds, but we are all equally human, we’re all equally capable of being in that bed.”

This leads Melissa to be an advocate as she is firmly convinced we are all broken people. Some of us have had circumstances that have allowed us to cope better outwardly with our brokenness, and some of us have been given the grace of meeting Jesus and having the Spirit help heal us, but none of us are perfect.

“We see brokenness in people no matter what, so I don’t want to peg my patients as being “the broken ones.” Like, just because they had a more complicated history, or something like that, that they are “the broken ones”. We see that, for sure, but you see it also in the nurse who snaps at a patient, or the doctor with poor bedside manner, or the injustice in illness sometimes. It doesn’t seem fair that people get sick sometimes. …Then you see, like, that this world is temporary.”

Melissa is deeply convinced that even though this world is not the way it was meant to be, it will not always be this way. This has allowed her to open her eyes to the beauty in the brokenness and pain that happens around her on a daily basis.

“I think there is beauty in my work, in that I get such a different perspective on life, death, health, and that I might do things a lot differently than some people because of that. You see people fight for life, and appreciate their health in a way that they don’t in a day-to-day way. Like, you woke up this morning and probably didn’t think twice about the fact that you were able to get up and out of bed, and people are really hit with that when they are in the hospital so they come to a new appreciation and understanding of their capabilities and their limitations.”

This recognition of their limitations forces a certain amount of humility in people, which can sometimes be difficult for them to accept.

“Watching the humility, I think is beautiful. Some people would say that it’s maybe sad, but you watch people become their core self. Which is sometimes a beautiful thing, and sometimes it really brings out their worse self too. …But I think as nurses we realise that people are in that place, and so you give people a little bit more of a free pass, they’re not expected to return the kindness always.”

In doing this, Melissa is able to give her patients a glimpse of the unconditional love and care of God. This care isn’t always what the patients’ expect, however, as she is more concerned about their ultimate recovery than she is about their comfort in the moment.

“Sometimes that compassion looks like a little bit of a drill sergeant. Like, sometimes people need you to be tough with them in order for them to get better. So, the expression of kindness and compassion isn’t always what someone would stereotypically think of. …It’s hard work recovering from surgery, you have to move right away. So, having to go through that with people, and having them understand the risks and everything is not always what they would consider kind or compassionate."

Melissa works hard to connect well with her patients and to show them she is on their side and wants what is best for them. This helps them trust her, even as she l pushes them through the hard work of recovery.

Melissa’s care for her patients leads her to push them through pain toward something better.

As I walked back through the maze of the hospital with Melissa, I realised I had just been given another glimpse of God’s unconditional and healing love. A glimpse of the caring drill-sergeant that pushes us through pain toward something better. God loves us, accepts us where we are, and works to move us to be better people.

Like Melissa with her patients, God knows the problems we face and the best way to heal us. Because he loves us, God is willing to push us through the pain required to make us whole.